Summer has finally arrived in Michigan and it couldn’t have come soon enough! I had just gotten home from Milwaukee when I got a call from a good friend of mine. His name is Don Tubbs III. His dad, Don Tubbs Jr., better known as Weasel, had two bikes he wanted to sell. I had stopped by Weasel’s house years before and looked at the bikes. He had two very old, hard ridden Shovelheads. Weasel lives about two hours away from the shop so I couldn’t just “stop by.” It had been so long since I had seen the bikes, I couldn’t remember much about them other than that they were Shovels. Don III was going to go see his dad over that next weekend. I figured that made it a good time to shoot up there. Besides, the truck was still all packed! It was a beautiful Michigan morning. Josh and I left just as the sun was rising. To my surprise, the more north we drove, the more snow was still on the ground. That’s Michigan for you! Drive a little ways and it can be a whole new season. Winter was trying to hang on a little longer up there. When I got to Weasel’s house, Don III was waiting there with his son, Don IV! The bikes were hiding in the barn out back. We walked around back past more take-off parts than a dealer ship would have. Weasel had worked at a Harley dealer for over 20 years as a mechanic. He had collected his share of parts over the years. He had parts coming out of every corner of this barn! We even found a cool, old FRX cop bike from 1985. I had come to buy the Shovels, but I couldn’t help setting my sights on all those parts! Weasel had been in the business for a long time and knows his stuff. Twenty years of swap meets and wrenching on Harleys had made him a very smart man about old parts. He knew what every part was and where every part was at in his barn. After haggling a bit, I was only able to score the Shovels, but it was okay, I was happy to just to get the bikes. All of the Tubbs love motorcycles and riding. Little Don was riding a snowmobile around the yard while we talked. We hung out for a while talking bikes and watching Little Don play in the snow. It was really cool standing there with three generations of Don Tubbs. As fun as it was watching Little Don riding Josh around on his little snowmobile, we had to head for home. I got a good line on some vintage Triumph race bikes on the way back; but for now the van is full and Josh already has a lot of work ahead of him! He has to clean and get those Shovels ready for the internet. ~Boomer Check us out on FaceBook: Boomers Bike Shop Follow us on Instagram: Boomers_Bike_Shop 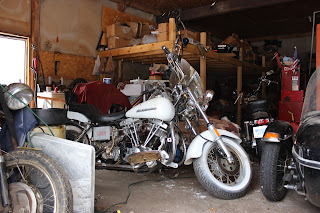 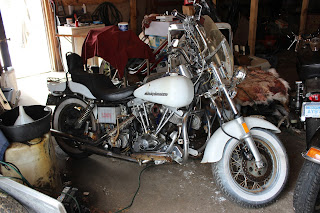 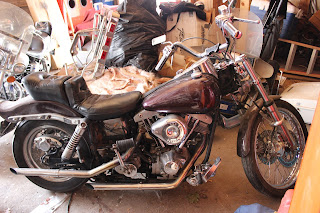 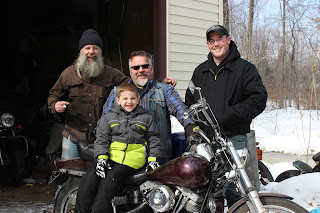 Posted by Boomers Bike Shop at 3:48 PM No comments: